What in the world are they spraying?

What would you say if you were told that airplanes were regularly spraying toxic aerosols in the skies above every major region of the world? That is exactly what a group of protestors were claiming outside of the annual American Association for the Advancement of Science (AAAS) meeting that was held in San Diego from February 18-22. However, inside the convention center was a different story. The scientists gathered to discuss the "plausibility" of implementing various Geo-engineering campaigns throughout the world, all under the guise that the Earth has a man-made global warming problem that can be solved in-part by spraying aerosol aluminum and other particles into the sky to block the sun. When these scientists were asked about the possibility of existing aerosol programs; they stated that no aerosol spraying programs have been implemented to date. A little confused? Why would protestors gather outside of a meeting making claims that world-wide aerosol programs were under way if scientist were only now discussing the possibility of implementing these programs? Could it be that one of these groups is being deceived? 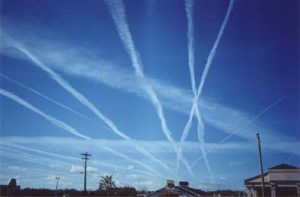 "What in the World are They Spraying?" a groundbreaking documentary Co-Produced by journalist and political activist Michael J. Murphy. By now everyone has seen crisscrossing streaks of white clouds trailing behind jet aircraft, stretching from horizon to horizon, eventually turning the sky into a murky haze.